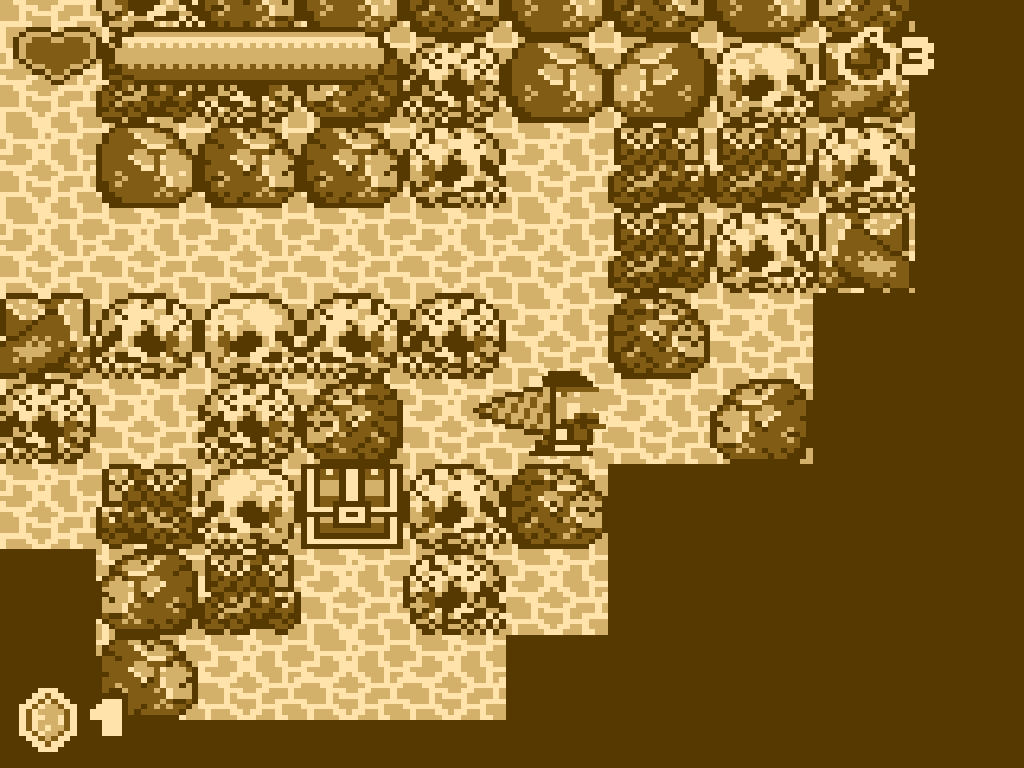 Most of the changes made to Subtraddition over the past few weeks have been aesthetic. I’ve redesigned the first world layout and spent a lot of time playing around with pixels to make it look nice. As I’ve said before, I’m no artist (I’m no programmer either) so trying out different designs for tiles sets was pretty challenging. This is what the game looks like now:

This screenshot is by far the best looking screenshot I have taken of the game so far. The bridge alone went through 3 iterations before it got to its current look and I’m quite pleased with how the game is coming along visually.

But there’s something I’m worrying about internally. Mainly: Should I retain the Gameboy inspired colour palette? I initially went with this style as I wanted to practice using only 4 colours and the Gameboy palette seemed like a good place to start. I always intended on keeping this palette, but lately I’ve been asking myself questions like “Should I allow the game its own identity rather than piggybacking on something already known” to more absurd ponderings such as “If I ever wanted to port this game to a console, would publishers want to avoid the game as it has associations with Nintendo?”

Strangely enough, Just as I was about to write this update I posted the above screenshot on Twitter and someone responded with “I love the atmosphere the color palette creates (Gameboy-inspired? Nice!). So the game is already getting people liking it due to how it looks.

I sort of feel in my gut that I should probably just keep the colour palette I’ve been using as there are commercial games out there which use these colours and the game is looking good, but I’d like to open it up.

A note on worlds

I mentioned ‘worlds’ earlier, so let me explain how levels are structured in Subtraddition. You start in the Start Zone which will mainly exist to teach the player the basics of the game. From here you navigate to the Hub Zone which contains all doors leading to the game’s main worlds. There are 3 worlds and within each world there are 5 rooms/levels which contain a core game collectable. Each room/level will be it’s own unique challenge to complete, but if the player finds themselves struggling they can exit and try out one of the others and come back later. There are 15 unique room/levels in total and I will probably try to include some sort of final level as the games climax, but I’ve not thought that far ahead.

I’d like to do a post about the different enemy types that are found in Subtraddition (they’re not traditional enemies. They’re not alive or anything. Mostly just objects that can kills you) but for now, I’ll just show off some updates sprites. First is a weird fire breathing head thing. Before the update it was just a brown square that fired red squares (and no I don’t mean the Russian vodka), now they conform to the colour palette and the fireballs are even slightly animated. This GIF would have looked better if the other sprites were updated, but still.

Next is the thwomp block. Before the update, these were just red squares with a scary face drawn on them. Anyone recognise the new sprite from somewhere?

How about that screenshake! Screenshake is something I’ve added into the game to make it feel as though there’s a lot more going on in the game world than there actually is. I was inspired by this talk aptly named talk “The Art of Screenshake” from Jan Willem Nijman of Vlambeer. Worth a watch for some ideas on how to help your game better connect with players.

There are lots of other visual updates I’d love to tell you about, but I’m hoping to write something about how I created some of the tile sets within the game and I’ll cover a lot of it in that. I also implemented some parallax scrolling into the game which makes the game look and feel a lot better.

My current to do list contains a few more aesthetic changes including finally adding a door into the game (currently you walk into a big white rectangle) and creating some decorative background and foreground tiles to make the levels less boring. After that I’ll mostly be fine tuning the start level and Level 1, so that I can hopefully send the game out to people to try out.

It’s not been long since I introduced Subtraddition, but I’ve updated a few things since that I’d like to share. Firstly, a new tile set. The area is supposed to look like a mossy cave. I’d like to do a post on how I created the tileset at some point in the future.

Next I finally updated the sprite for the checkpoint instead of it looking like a horrible pink box (see above GIF). The idea is that the sphere is a resurrection stone and when you die you are resurrected at the shrine. The GIF below only shows the shrines being activated and not put into practice.

I mainly started working on the visuals for the game because I was generating level designs and it was becoming very time consuming and I felt that my brain needed a break from it. I updated the images for the tiles in the  first area, the block that you can move around and the spikes (these feature a lot in the game). Now that the checkpoint doesn’t look so much like a hideous pink obelisk I think I will get back to getting the level layout completed for the rest of the game.

I’m making a game! I started working on it just after Christmas I think? Anyway I was toying around with the idea of making a puzzle platformer and then I started working  on a prototype and now I’m going to be making it into a full game.

This is the core mechanic of the game:

The game is being made with Game Maker: Studio.

Hang on, I thought you were making a game called Gravity Square or something?

Gravity Box is currently on Hiatus at the moment. For some reason as we got closer to Christmas I started to lose interest in working on it and ultimately stopped all together. This isn’t to say I don’t want to make the game at all… I’m just more motivated to work on this puzzle platformer game. Plus I’ve since learned a lot about game development that I can use to create a better version of Gravity Box than the one that I was working on.

So what’s so special about this new game?

With Subtraddition I actually made a small prototype last year before I started working on Gravity Box. The prototype saw you placing blocks to help you navigate the level and as I worked on it more, the more I began thinking up puzzle/level designs for the game. I was also really inspired by playing Fez around that time and loved the sense of exploration that the game made you feel as a player. I also began to think about old platformers I used to play as a kid that I loved like Banjo-Kazooie and Jak and Daxter. Essentially, Subtraddition caught the attention of my imagination more than Gravity Box ever did and I think that’s why I’m running with it instead.

What is it about?

The core mechanic as shown above, is that it’s a 2D puzzle platformer in which you can remove and place certain blocks within the level in order to allow you to use them as platforms and reach new levels. They’ll also do other stuff like protect you from damage, reach new heights and jump across distances you would otherwise be unable to reach.

The game is also about exploration. You start of in a starter level, which leads into a hub world with multiple levels and multiple puzzles to solve and a butt-tonne of secrets.

4 COLOURS – I’m doing the art for the game and as I’ve said previously I’m not that great at art. I mean, I do okay… I get by. So I felt that limiting myself to only 4 colours would mean that I had less chance of making it look shit than if I made a colourful mess with a bunch of colours. I’m also working to quite a small resolution, so I’m practicing my pixel art with this game. I find that it helps to give yourself restrictions/limitations as otherwise you can overscope.

SECRETS – After my recent playthroughs of Fez, I loved how the game is filled to the brim with secrets. Although my game won’t be anywhere near the scope of Fez, I still like the idea of including little hidden secrets that will reward the player for exploration. Which brings me on to my next point:

EXPLORATION – As I mention above, one of the things I love about video games is exploration. It unfortunately means that it takes me a lot longer than it should to complete games. I mentioned to someone the other day that it took 6 hours to complete Gone Home and they were all like “SIX HOURS :O … You can beat the game in 10 minutes!” But I like to take it slow and explore every nook and cranny of the world. I was the same with Bioshock Infinite. I’d spend ages just wandering about looking at stuff and this is something I’d like players to want to do in Subtraddition even though I suppose it largely depends on the type of player.

Where is it at?

Subtraddition is coming along nicely. I’ve almost completed the level designs for 2 out of the 3 worlds that the game will contain. I’m currently working on updating the graphics for the game and implementing tile sets into levels. Navigation works, the character movement works, the block removal/placement works and there are a few levels to run around in with puzzles and platforming to complete. I have no idea how long the game is going to take, but I’m using every spare minute I get before the big life-changing event happens. September is my deadline! More updates soon.

A couple of our games are being placed on Indie Game Stand’s Free Games section. You can find Time Stone HERE and Entrapment will be on there soon.

You might have seen the recent ” game” announcement and yes, it was an over-elaborate metaphor for me and my wife having a baby! It’s our first child, so I’m going to have a lot to learn about becoming a father. It also means that my hobby game dev stuff will most likely be taking a lengthy break come September.