Wow! Was it really APRIL when I last posted about this game? Well I will blame that on the fact that I am a full-time lecturer at a college and it was the back end of the academic year, which is the busiest time for us due to marking and visits from external moderators and such, but you don’t want to know about that, you want to know about the GAME! Work on the game is slow as I’ve also been on holiday and it’s difficult to juggle work, home-life (which includes a wife and 10 month old baby daughter) with games development, plus there’s games to play, TV shows to watch and books to read, there just isn’t enough time in the day. Here’s what’s been happening since the last post:

Although GaMaYo was a while ago now, there have been a few things posted online since my last update. You may recall I mentioned I was interviewed and that interview is now available online for your viewing pleasure (if you’re into that sort of thing). You’ll be able to see how much of a dork I look and sound like. But seriously, there’s some gameplay footage as well as some info about the game revealed in the interview, so take a look.

There were also a bunch of photos released from the evening. You can see them all here (scroll down on the page), but I’ve selected a few choice ones below: 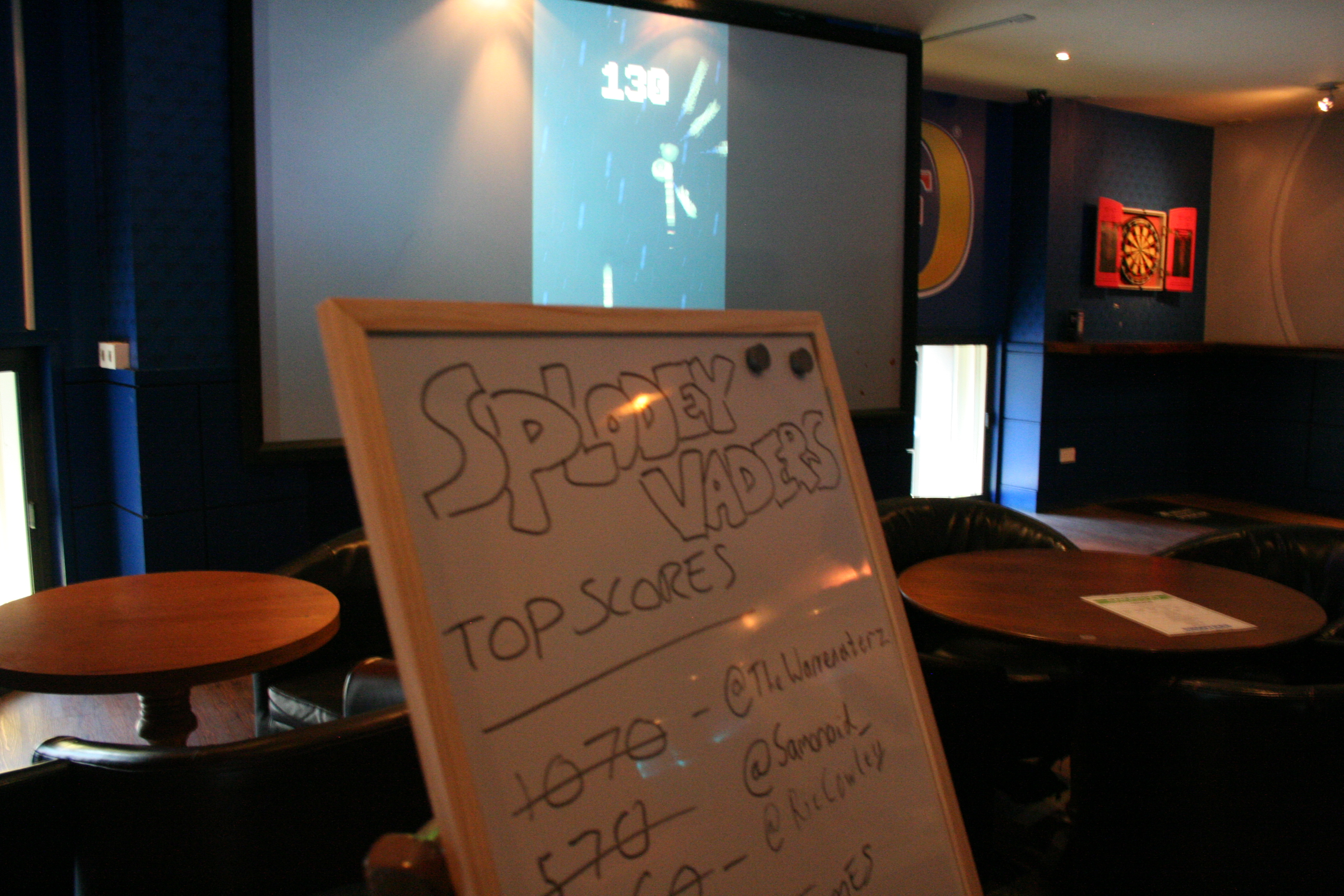 I hadn’t built high score saving into the game yet and wanted a way to retain the score if I had to close the game down for any reason. My genius solution was to just write the top scores down on a white board with Twitter handles next to it. 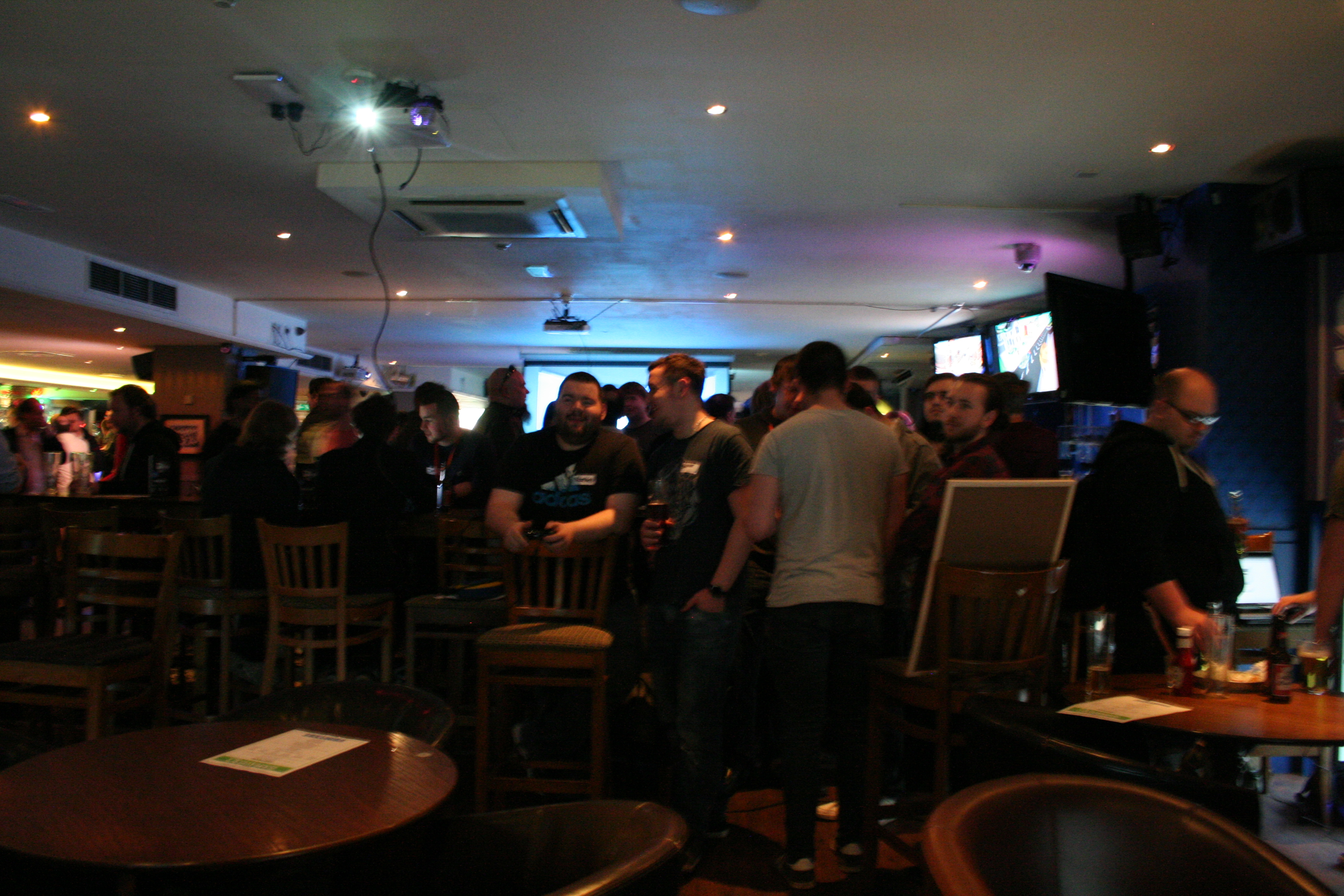 I was quite proud of the crowd that the game was attracting. All the people at the front of this photo (and a few behind) were all watching/queuing to play Splodey Vaders. I felt a little rushed off my feet at times, which is a good thing. 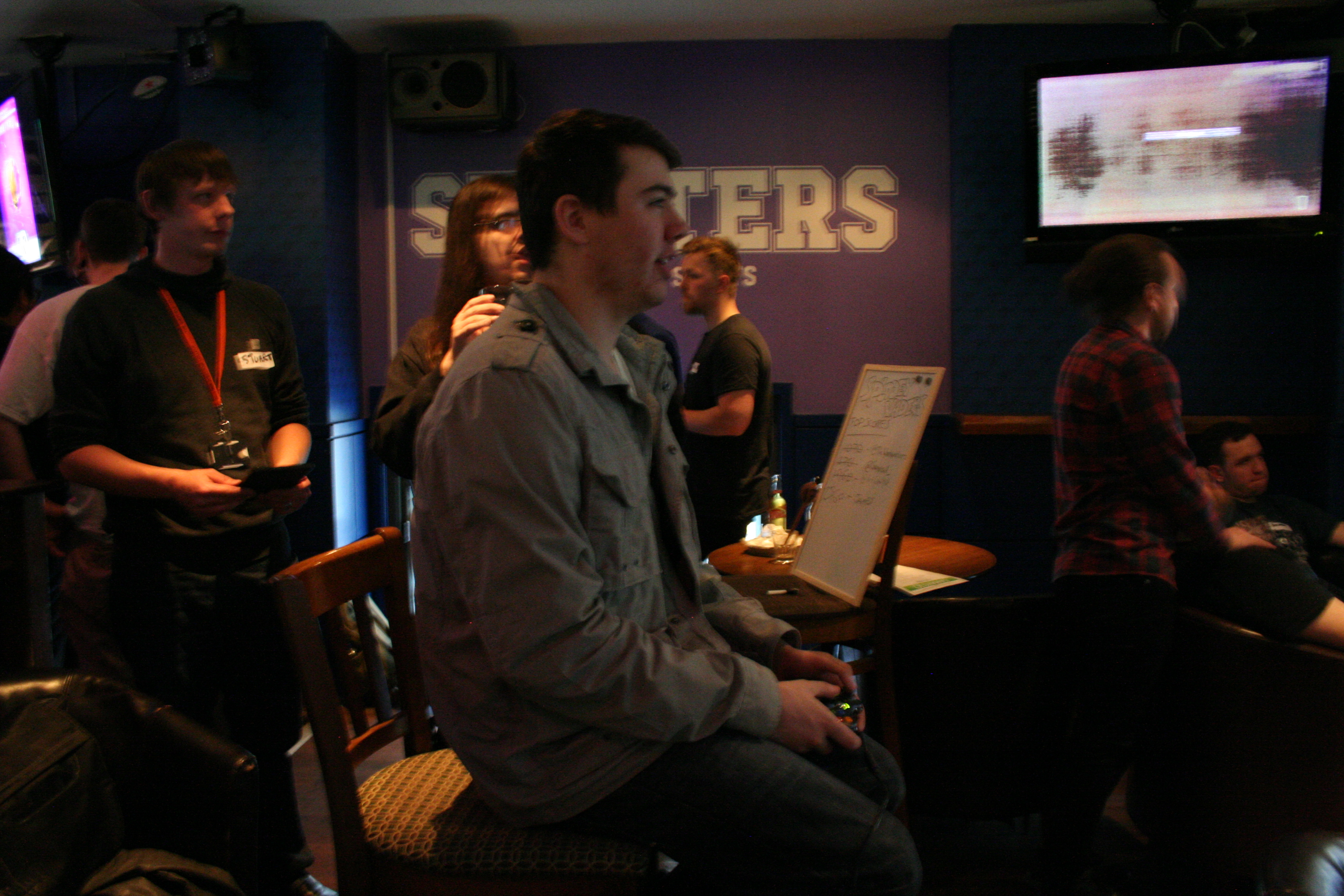 Here is an action shot of someone sat enjoying the game with me stood in the background like a goofball holding the Android version. I’m not sure why, but I appear to be watching the screen intently.

WHAT’S HAPPENED TO THE GAME SINCE THE LAST BLOG UPDATE?

Quite a lot actually. You can keep up-to-date with all the main changes on the games Trello page, but here’s the low down on the main additions.

Integration with Game Jolt High Scores – Game Jolt users will be able to sign into Game Jolt within Splodey Vaders and post their high scores to leaderboards. This was a little tricky to get working right and I’m still not 100% happy with it, but it works for now. This will hopefully pave he way for the inclusion of achievements/trophies in the future.

Lots of BORING front end stuff – Splodey Vaders now has a menu rather than jumping straight into the game. There’s all the amenities such as stats, settings, credits, etc. Really exciting stuff.

The game will save your high score – Not only that, but it will also save your stats too. There’s also a menu option to delete all saved data on the game, so you can start a fresh.

There a few more menu and score tweaks to be made, but after that I’ll be looking to produce some new sprites and artwork for the game. The current Metroid and Galaga rip offs were only ever meant to be placeholder, but I just haven’t got around to updating them yet.

I want to game to be a little more than an arcade shooter with no overarching goal other than ‘Achieve High Score’, so I’ll be looking into adding longevity by including unlocks such as new ship designs, special power ups and enemy types. This will work something like how in Super Crate Box, when you unlock character designs and new weapons.

I’ve also been thinking about the release of the game. The current focus is to complete the PC version first and release this on online stores like itch.io and GameJolt. Although I originally intended this game to be free, I feel as though with the additional features I’m looking to add, I’m going to charge a small fee. Current thoughts are that the game will cost around $2.00. It would be good to hear what people think about this. I’ve wanted to release a comercial game for a long time now and I feel that Splodey Vaders could be a game worth paying money for (even if it is super cheap).

Please tweet or email me if you have any questions about the game and also follow me on there as it’s where I post the most updates on the game.